A frightening Resident Evil-esque experience, One Night challenges you to escape from "The Complex", a crumbling, abandoned research facility while being hunted mercilessly by the remnants of a long forgotten experiment.

Relentless monsters and difficult puzzles await around every corner - can you survive the horror?

One Night 2: The Beyond is the long awaited sequel to the original RPG Maker VX survival horror game, first released in mid 2010.

Set almost thirty years before the original game, One Night 2 is a Lovecraftian adventure game where you must solve the mystery of Mairstone Manor, a house controlled by an ancient, malevolent evil, and discover the origins of the horror.

With an eldritch presense of unknown origin bearing down upon you, it's going to take everything you can muster to escape from Mairstone Manor alive.

"It really nails the atmosphere" - IndieGames.com

One Night: Full Circle is the final game in Dark Gaia's RPG Maker VX made survival horror series. It is intended to tie together and resolve the stories of the previous two games in an exciting conclusion. It was released in early 2011.

In One Night: Full Circle, you must search for your missing sister Alyssa in the town of Stillwater, a place that has been a ghost town since an unknown catastrophe occured one fateful night six months ago. As you uncover the secrets of the town in search of your goal, you'll also discover how the stories of the previous One Night games tie together and follow them through to the dramatic ending.

An entire town awaits your arrival. It's up to you to survive the many horrors it holds. It's going to be a monumental task. Do you dare attempt it?

Get the sequels to the game here: https://rpgmaker.net/search/?q=one%20night

The link is wrong 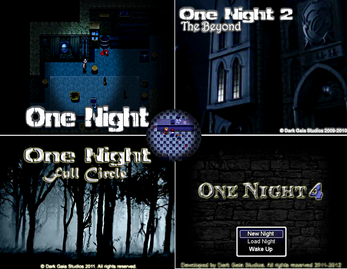