Find the secret key in each of the four games
1. Asteroids - Quest for Sword of Freedom
2. Berzerk - Quest for Shield of Liberty
3. Dragonfire - Quest for Helmet of Justice
4. Pitfall 2 - Quest for Cup that heals

This is a knock-off of the legendary arcade game Asteroids, with a few
twists of my own :)

Hold thrust to move. Release thrust and your ship will coast to a stop.
When the ship is flashing at the start of levels and after being
destroyed, you are invulnerable (though only for 2-3 seconds!).
Bonus ship every 25,000 points (max of 9 ships at a time).

SHIELDS
Can only be on for up to 2 seconds at a time, and need an equal time off
to "recharge". Keep them up for longer than 2 seconds and your ship explodes!
While up, nothing can harm you, except the mighty Superbomb.

When released, they glide slowly in a straight line, and detonate when they
run into something or after a short interval. The explosion is a spreading
fireball, incinerating everthing it consumes, including you if you're not
fast enough (even with your shields up!). Extra superbomb every 30,000 pts.
Asteroids and enemies destroyed by the superbomb will give you TRIPLE points!

ASTEROIDS
They're just rocks, but can pulverize you. They drift and tumble through
space mindlessly and come in three sizes. Large rocks split into 2 medium
rocks, and medium rocks into 2 small rocks.
Large and medium rocks may take more than one hit to break up!

SAUCERS
Come in large and small sizes, and track you relentlessly. The large saucer
is slow, but shoots fast and takes multiple hits to destroy. The small
saucer is quick, but shoots less and takes only a few hits. They first appear
at level 3.

SEEKERS
Are guided missiles which home in on your ship. Shields will protect you.
Shoot them before they reach you (one hit destroys them). They make their
debut at level 5. 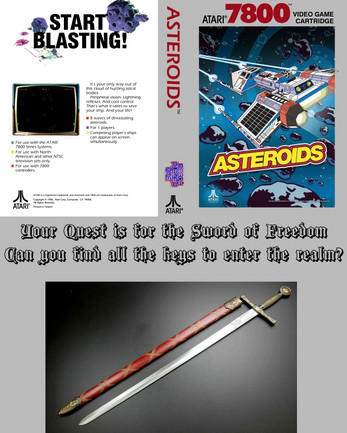