A remake by Trevor (Smila) Storey and Scottige
Music by Xentrix and the Evil Scotsman. (Music remix of real gbusters, gbusters1+2 for main game - RL)

The easier the difficulty, the game is affected as follows:-

1.Slower ghosts on ghost catching screen.
2.Backpack power takes longer to go down.
3.Less traffic on the driving screen.
4.You start with more money when starting a new game.

On training mode, there are no cars, infinate traps and ghosts move in slow motion on the catching screens.
The ghosts do not move as far towards the edge of the screen in training mode.

Use up and down to move then action to select your car.

Use up and down to move then action to select your item ,
or use the number keys 1-7 , press 8 to continue or the
ghostbait key to reset your choices.

1. Pk detector  - tells you the current pk energy level.
2. Image intensifier - shows up building that may possibly
be haunted as purple.
3. Marshmallow detector - allows to to see a marshmallow
attack and stop it happening.
4. Ghost trap - can hold 1 ghost.
5. Ghostbait - has 4 charges , attracts ghosts and stops
the marshmallow man forming , saving the city damage.
6. Ghostvacuum - holding action in the driving part sucks
up the ghost stoping them getting to zuul.
7. Portable containment system - can hold lots of ghosts.
8. Gontinue with game.

The ghq is located at the bottom of the screen , whenever
a player has been slimed or you need to empty your ghost traps
this is where yo need to go.

Zuul is located in the centre , this is where spooks are
building up there energy for the arrival pf zuul.
once the pk reaches 10,000 you are summoned there .
If you dont have more money than you started with when you reach
zuul its game over.

When marshmallow man attacks quickly press your ghost bait key
before he forms to stop his attack and you are awarded $2000.
If you dont you are fined $4000.
But be warned , you only have 4 charges .

If a building flashes red its haunted , if it flashed purple it may
be haunted.

To goto a building simply go next to it , push in the direction of it
and press action.

Driving game
-----------
Press forward /back to accelerate/decelerate and left and right to move.
Collect the cash for a bonus , if you have the vacuum hold action to
suck up any ghosts that pass by.

If you have made more money you will need to get past the gigantic
Marshmallow man , be carefull and run through his legs into the doorway
withought getting squished .
Get 2 ghostbusters passed succesfully and you will be taken to the final battle
with gozer.

Remember  - if somebody asks if your a god you say YES!

Special thanks to the musicians.
Xentrix can be found at http://www.xentrix.co.uk.
Also thanks to Darkside and Kryten for Beta Testing. 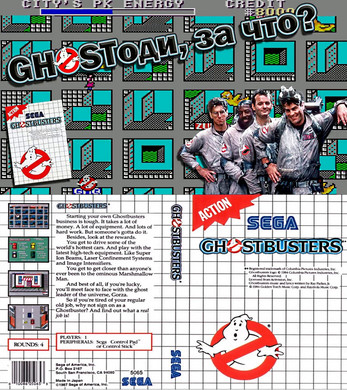